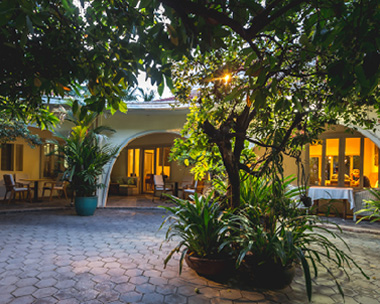 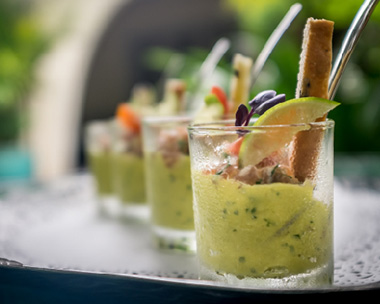 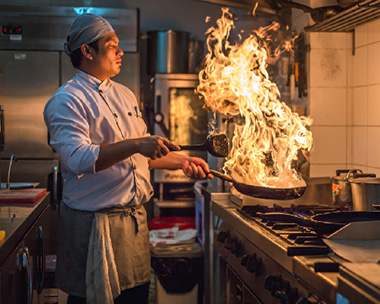 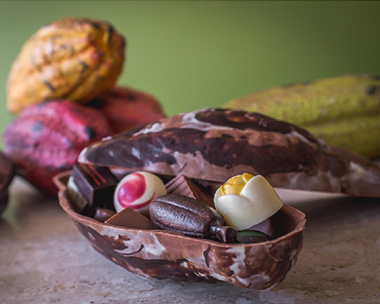 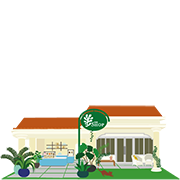 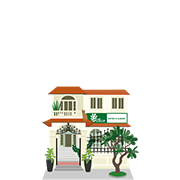 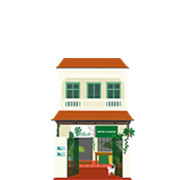 Over the past decade Phnom Penh’s Toul Kork area has expanded fast, which is why we opened a brand-new garden cafe location there in 2009.

This charming single-storey building is bright and spacious with air-conditioning inside, a child-friendly garden out front and a lovely terrace at the back. It is a great venue for team meetings or an intimate meal.

Located in the heart of the old French part of town near Wat Phnom, The Shop 102 at Central Mansions is on the ground floor of this stylish apartment complex.

Offering our full range of pastries, cakes and coffees, our outlet here stays open late with an expanded menu of Asian and Western dishes as well as a full bar menu including tasty cocktails.

The Shop is located on tree-lined Street 240 near the Royal Palace, it was our first outlet when we started in 2001 and it remains hugely popular. This colonial-era house has a peaceful patio out front, a wood-floored dining area inside, and a leafy eating area out back.

Ceiling fans keep things cool, and a fresh supply of free newspapers in this oasis keeps our customers up to date with world events as they enjoy our Mediterranean-inspired menu. 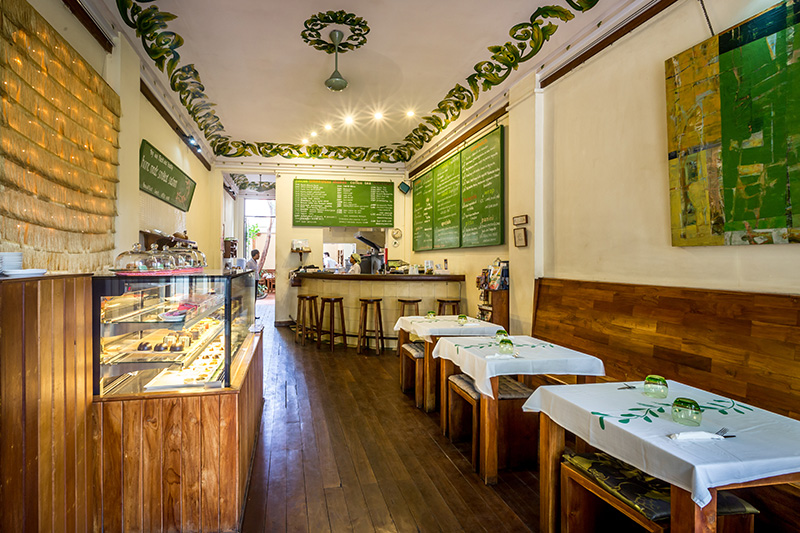 Just two doors down from The Shop 240 is The Chocolate Shop 240, a charming air-conditioned haven of Belgian chocolates and excellent coffee located on the ground floor of a colonial-period house.

Should you wish, you can order your lunch from The Shop 240 and enjoy it at The Chocolate Shop while your eyes feast on the tempting display case full of delicious, handmade chocolates. 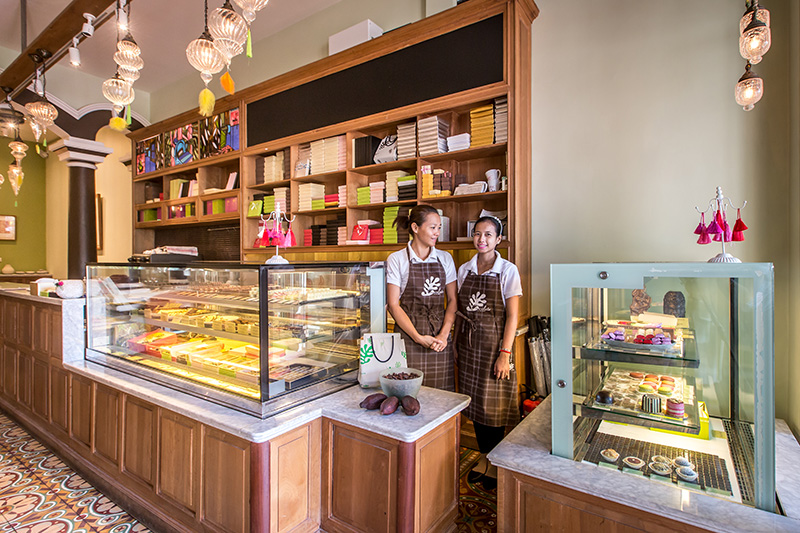 Building further on the success of our Chocolate Shop in street 240, we opened a new branch in our beautiful garden setting at our Toul Kork branch. It is a beautiful green location where our expert team of chocolatiers work hard to ensure you can enjoy the best chocolate experience in Cambodia. Come by to watch your favourite chocolates being made!

You can also buy our full range of chocolates from this outlet. So drop in to pick up your choice of our amazing treats, from pralines to truffles, caraques to bars – all made using traditional Belgian recipes couples with local ingredients and the finest high-cacao content chocolate sourced from around the world. 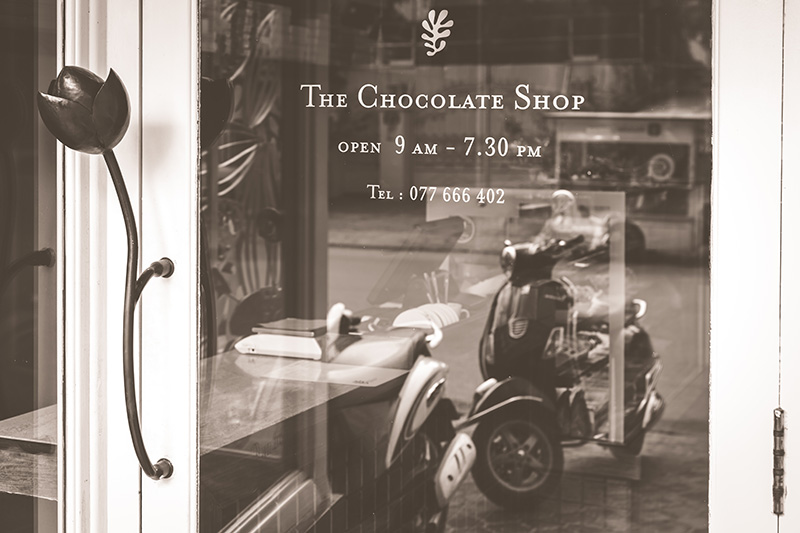 We’re driven by a passion for excellence and great service; our food is wholesome and delicious; and wherever possible our ingredients are organic because, we eat here too, and, like you, we prefer clean and green!

Come to enjoy breakfast, lunch or dinner and savour one of our great coffees with a fresh pastry, or to pick up a box of our unique handmade Belgian chocolates. If you love to enjoy great food and drinks in a relaxing setting, you’ll love what we have to offer. 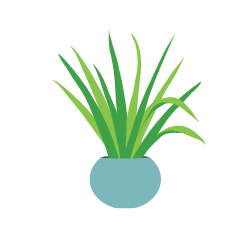 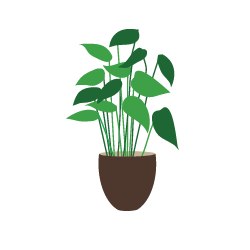 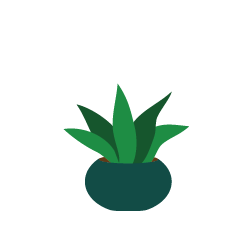 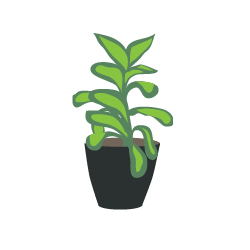 Previous Next
We pride ourselves on the quality of the handmade pastries, breads, chocolate and deli items we craft at our locations each day. We use only the finest and freshest ingredients and you can taste the quality and love in every bite!

Using traditional Belgian recipes and the latest technology, our team of chocolatiers craft delicious treats using only the finest high-cacao content chocolate sourced from around the world.

Our offerings are impossible-to-resist and range from dark chocolate to milk and white chocolate. They include classics such as almond truffles and raspberry pralines as well as locally inspired delights made with special ingredients such as Mondolkiri honey.

For true aficionados and the more adventurous our dark chocolate bar infused with spicy Kampot pepper might well be for you. It certainly hit a chord with the New York Times, which lauded this creation as being “as sweet and as hot as the tropics themselves”.

Our chocolate is so good that it’s only fair to warn you: few visitors manage to leave empty-handed.

It is no surprise that many of Cambodia’s top hotels and restaurants regularly order their chocolate delights from us. And you can too!

Want to learn how to make Belgian chocolates?

If you want to be the envy of all your friends, then come and join one of our fun, one-day classes where we teach everything we know about the ancient and toothsome craft of making Belgian chocolate.

We hold classes once a week at The Chocolate Shop on Street 63, the place where we make all of our chocolate. Classes run from 1 March through to 31 October. To find out more, please get in touch:

We cater for all events!

Catering is in our blood, and over the years we have built a well-earned reputation as Cambodia’s best event caterer.

If you’re wondering what types of events we cover, we can say with confidence that we’ve done them all: from embassy receptions to NGO gatherings, from boat parties to weddings, black-tie functions to informal get-togethers. We can provide simple snacks and soft drinks or serve a five-course meal with wine and champagne.

If you want Asian food, we can do that. Or if you prefer Western food, we’ve got that covered too. And we don’t limit ourselves to Phnom Penh: if you need an event catered in the north, east, south or west of Cambodia, the chances are we’ve been there before, and we’re more than happy to go there again.

Nearly two decades of catering means no event is too big or too small for us, and, with our uniformed staff trained by international management, we can guarantee consistent and reliable service for your function. To enquire about our catering services, please get in touch:

Check out our services!

That’s why every day we supply a range of fresh goods – our pastries, breads, cakes, chocolates and even smoked salmon – to restaurants, bars, shops and hotels across the country.

It’s not just the customers in our outlets who love our food – other businesses do too.

So if your business is in need of the best food on offer at our competitive wholesale prices, please get in touch:

In 2001, Griet Lorré founded The Shop on Phnom Penh’s iconic Street 240. The idea was simple.

“I wanted to create a place where people could come and chat, relax and enjoy good food and drinks, but there was nothing like that in Phnom Penh at the time. On Street 240, away from the bustle of the city, I found the perfect setting: this colonial-era building where we opened our first outlet.”

Griet says the staff are integral to the group’s success. “Our customers are very important of course,” she says, “but our staff are too – and you can see that in their loyalty to the group.”

On average, each of the more than 100 staff has been with the group for more than five years, and some since the very beginning in 2001.

“And that’s because we train people so that they can rise to senior positions, everyone shares in the profits, and they get excellent health insurance,” she says. “It’s a great work environment, and people really feel part of a family. It’s something special.”

The Shop Group is also a much-loved part of the Phnom Penh community serving both Cambodians and expatriates; they are, Griet says, “the bedrock of our success”.

“Something else I’ve noticed in recent years is that, as tourism to Cambodia has climbed into the millions, and as the influence of social media has grown, many more tourists are visiting our outlets,” she says. “And they spread the word through TripAdvisor and Facebook, which makes a difference.”

Since The Shop Group started in 2001, says Griet, the city has expanded fast – as have the number of competitors.

“But our excellent reputation has allowed our group to grow steadily each year,” she says, “and I’m looking forward to continuing that for the next 15 years and beyond.” 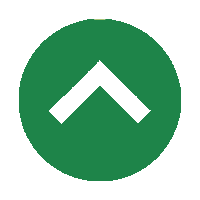 Stay up to date with our weekly specials, events and other news by subscribing to our newsletter. Click here.